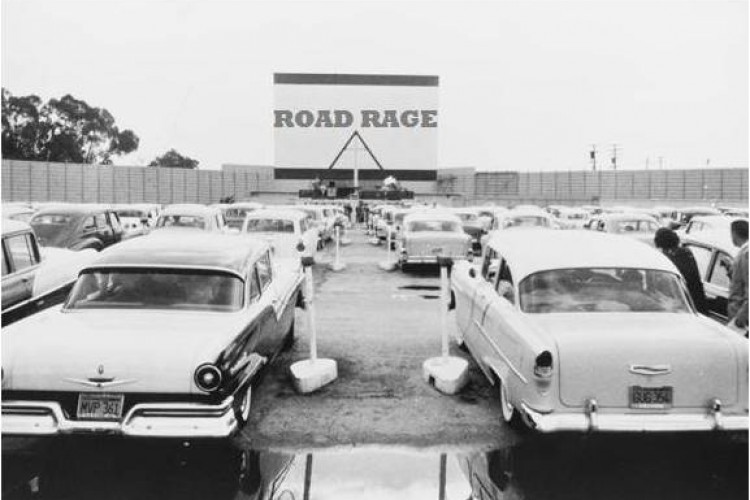 Motorists will shed a tear in their car 33 times, explode into 81 fits of road rage and join in on 112 Wayne’s World-style sing-alongs in the course of their lifetime on the road, a study found. It also emerged during our time behind the wheel we will be involved in 51 arguments, scoff 60 meals on-the-move and enjoy 81 smooches.

Road rage, insults, rude gestures can lead to fines, even prison in Germany the USA and Dubai-do you think we should introduce more stringent laws here? Take our interactive poll at the foot of this article.

Researchers also discovered the average driver spends nearly nine hours a week in their car, totalling almost 19 full days in-transit every year. In a typical week we will cover a distance of 82.88 miles, totalling 4,321 miles each year or 257,355 miles, covering enough tarmac to drive to the Moon and beyond.

Additionally the study found the average driver will also put their suspension to the test riding over 150 pot-holes, and will gleefully slosh their doors riding through 95 notably-deep puddles. A typical week of driving will also involve spending 23 minutes in the car motionless or waiting at traffic lights, totalling nearly 20 hours stationary each year.

Over a lifetime, that’s 48 full days spent in our cars going nowhere.
The study was carried out by the British Lung Foundation to highlight the high levels of toxic fumes drivers are exposed to when sitting in traffic. A spokeswoman said: “As a nation we spend so much time in our cars, so It is important to think carefully about the damage we are doing to our lungs.

”We are breathing in toxic fumes when we’re driving or running the engine, and many drivers are not aware of this.”

The survey, which quizzed 2,000 drivers, also discovered just two per cent currently drive a hybrid or electric vehicle, while a conscientious 43 per cent would consider replacing their petrol car with a greener alternative in the future. Eighty two per cent were ‘concerned’ about the effect pollution could have on their health.

Of the smokers who took part in the study, conducted by market researchers OnePoll, 26 per cent said they still smoke in the car when there are other people riding with them, and 31 per cent smoke when they are driving alone.
Seventy five per cent of those polled agreed banning smoking in vehicles was a wise decision. Thirty one per cent of respondents advocate the use of diesel fuel in vehicles, while 22 per cent think it should be banned due to its effects on the environment and our health.

As for the proposed increased taxation of new diesel vehicles in the future, marginally more Brits now support the rise than oppose it. When asked which health concerns were caused by car pollution, two thirds believed fumes caused coughing and 57 per cent thought it could lead to a decrease in lung capacity.

One in two people thought it could affect healthy development of lung tissue in young children and a quarter of Brits said they thought exposure to air pollution increased your risk of a heart attack.

The spokeswoman for the British Lung Foundation, which commissioned the study, added: “We would really like to see people leaving their cars behind if at all possible. If more drivers were aware of the damage they were doing to their lung health when they step into a car, maybe they would try to reduce the time they spend on the road.

“At the British Lung Foundation we are committed to raising awareness around these issues and helping to combat the effects of poor air quality.”