Mini has unveiled a one-off electric version of its iconic original car – as the British firm showcases its zero-emission technology.

The classic Mini is the world’s most recognisable city car, with more than five million sold between 1959 and 2000 and now engineers at the Oxford-based manufacturer have transported a classic model into the 21st century by turning it into an electric car. The road-legal car is fitted with 30 lithium-iron phosphate batteries to give it a range of 65 miles and a top speed of 75mph.

By combining a compact but practical design with groundbreaking, zero emission technology, Mini has created the perfect modern urban vehicle. A statement from Mini said: “With this unique vehicle, Mini sends out a clear signal demonstrating its commitment to retaining the brand’s unmistakable character whilst embracing innovative zero local emission technology.

“The spontaneous power of its electric motor provides a new dimension to the unmistakable go-kart feeling that helped propel the British small car in its original form to worldwide popularity.”

Mini and BMW unveiled the electric car at the New York Auto Show – and it will remain a one-off with no plans to return the icon to production. However, Mini is currently working on a hotly-anticipated electric version of its current three-door Mini which is set to go on sale next year – marking the 60th anniversary of the original Sir Alec Issigonis-designed model. 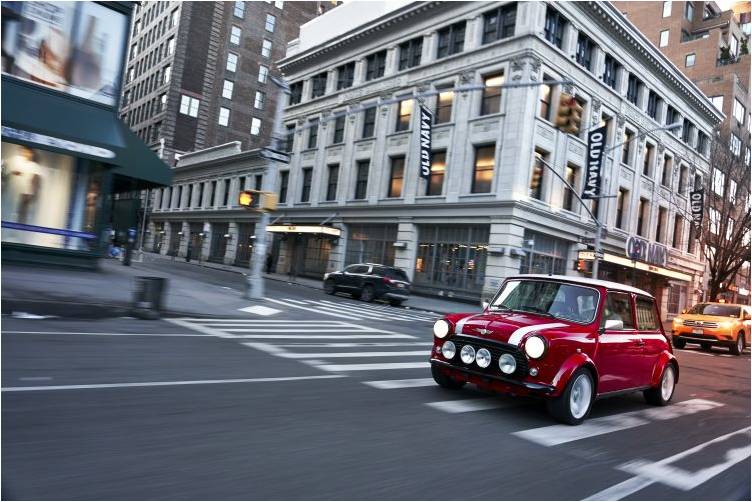 The new Mini’s electric drivetrain will be built at the BMW Group’s e-mobility centre in Bavaria, Germany, before being integrated into the car at Plant Oxford, which is the main production location for the three-door Mini. It is one of a number of electrified models being launched by the BMW and MINI brands in the coming years.

The BMW i8 Roadster, one of the world’s most exciting plug-in hybrid supercars, goes on sale this year.

BMW also builds the world’s most popular premium electric car, the i3, and announced it had just sold its 10,000th model in the UK,sales of alternatively-fuelled vehicles (AFV) such as electric cars are on the rise as infrastructure and range improves. Chargemaster estimates by 2020, there could be around 70,000 charging points both on the road and at destinations, with that number expected to rise to over 500,000 by 2030.

Figures from the Society of Motor Manufacturers and Traders showed that in the first two months of 2018, there were 12,567 new AFV registered in the UK this is an increase of 18.7 per cent on the previous year – at a time that overall registrations were down 5.1 per cent.